Butter on your nose - a slippery birthday tradition 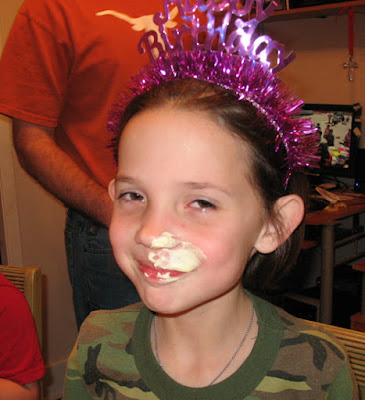 The other day, I got an email from Shirley, who writes:

"When I was growing up, it was a tradition in our home that on your birthday your mother would sneak up on you and put butter on your nose to bring you good luck on your birthday. I know none of my townie friends experienced this. So, I wonder if this was something only my family did? Or if it was a outport tradition? My family had connections to Placentia Bay, Bonavista Bay, Green Bay and Corner Brook. Have you heard of this?"

I have indeed heard of it, but it isn't a tradition I'm overly familiar with, and I'd love to know if other people celebrate someone's birthday in this way, and where they are from. A quick internet search reveals a little bit of information, much of it recycled word for word from various websites. The tradition goes by a few names, such as "grease face" and "buttered noses." Another variant is referred to as being "flakied" - where a flaky pastry (notably the Passion Flakie popularized by the Canadian firm of Vachon) is rubbed in the face of the person celebrating their birthday.

The tradition clearly goes beyond Newfoundland and Atlantic Canada.  One blogger writes, "When I was growing up in the Floyd/Patrick/Carroll counties area of Virginia, it was traditional to attempt to sneak up on the birthday person and smear butter on their nose. Even our teachers in elementary school would get in on the action, going to the cafeteria and getting the butter." Another American blogger writes that "As the story goes, the butter is meant to help you slide into your new year!"


I was born and brought up in Providence, R.I. We children buttered each other's noses on birthdays which meant being chased around all day by a sibling with a hunk of butter on her finger. Mother did nothing more than shake her head. I have lived in California for the last 63 years. Nobody out here has heard of it. A faculty member at UC Berkeley said the custom originated in Cornwall UK. I'm now 86 and it pleases me that I'm in good company.

I grew up in North Carolina and our tradition was putting black grease on the birthday person’s nose by sneaking up from behind as a surprise. I know of several families in NC that did the same thing. I thought it was a southern tradition, didn’t know it has its roots in Canada. None of my grandparents or parents ever told me what it was supposed to mean. I assumed that it was for good luck. My kids hated it and would run away, my wife from Indiana didn’t understand what it was all about, so we discounted it once our kids got to be teenagers. It made me a little sad to see a tradition die away, even though it was a little strange.

If you have thoughts on birthday butter, black grease, or flakies, email me at dale@heritagenl.ca or leave a comment below.

Hello! I found your blog when Googling this tradition to find out if it was something other people did as well as my dad! I grew up in Halifax, Nova Scotia. My dad loved this tradition and I can remember the smell of the smear of butter staying in my nose all day. He always said the deed had to be done before noon, although he said that about April Fool's Day, too, so maybe he was just trying to contain the chaos. :)

I Googled this also to see if anyone else went through this on their birthday.
I remember waking up in the morning on my birthdays when I was little, and my mother would put butter on my nose.
I hated it, waking up that way, and I would cry. I would fuss and cry and beg her not to do that to me again.
It got so that I dreaded waking up on my birthday, and would force myself to wake up before she could come in my room and do that to me. It was a very bad memory for me, and I didn't think it was funny. I also was very upset that she wouldn't stop doing this "tradition" even though I would end up in tears.

Just for fun I googled butter on the nose. Yes, it was a tradition in my family to butter the birthday persons nose for good luck.. Both my parents were from P.E.I. Canada. I have continued this tradition in Toronto. Only the Eastern Atlantic people get it. The others just think it is mean.

My grandfather used to put butter on our noses for our birthdays, when we least expected it, even though we knew it was coming at some point. I recently asked my mother about how the tradition started but she couldn't remember. I didn't expect to find an answer when I googled it and was surprised to see how many have commented on it being a tradition in their families! I did read that it is reputed to be of Scottish decent which my grandfather was.

My family has this tradition as well! It was passed down from my great grandmother who was from the West Virginia/South Western Virginia area as well. Much of my family still lives in that general area and we are keeping the tradition alive!

When I was young your nose always got buttered and a spank for each year and one to grow on. If no one did it then we always thought that your birthday had been forgotten. My ancestors came from Scotland, Ireland, England and Nova Scotia. The first time I did it to my husband, who is Italian, he had a fit. The tradition has now faded out in my family. How sad!

My family does this! The tradition comes from my grandmothers side who hailed from New England, and England/Scotland prior to that. We've never known anyone else that does this or where it all stemmed from, but we all still follow this tradition.

I’ve an Irish and maybe Flemish heritage, and from my earliest memories, our parents woke us up on our birthdays with butter on our noses. I think this goes way back to when butter was something special, so perhaps also related to a wish for prosperity in the coming year.

Yep, it's my birthday and I got the butter on my nose. I was born and raised in California but have grandparents hailing from Minnesota and before that England. I've always wondered where this started, too. We always took it with great humor and a little disappointed if someone forgot. But also didn't give in too easy either. lol

Today is my 63rd birthday and my sweet husband buttered my nose so that I would "slide through another year". I love this tradition from my mom's side of the family.

I found this googling the tradition as well. I was born and raised in Arizona, where I am now, but lived for 11 years in Virginia, ironically in Floyd, Montgomery and Pulaski counties. When I first arrived I found the custom odd. By the time I left it was second nature and I would have to look over my shoulder as my friends and coworkers knew I had no family so it was up to them.

I was born and raised on a farm in Iowa. We have had this tradition as long as I can remember. I just talked to my sister who is 84 today. She can't remember where the tradition came from either, but her kids and great grand kids are keeping it going. It was always great fun to see who could get the deed done.

My dad's ancestors were Scots-Irish and we did the nose-buttering when I was a kid. And then shoved under the table whilst happy birthday was being sung. I thought it was just some weird tradition until I googled it on the internet. Sadly, my husband wouldn't let me continue the tradition with our kids...

I grew up in WV and for us it was crisco.

My Dad ALWAYS does this. He says it's a Newfoundland thing and that his dad used to do it to him too 😊 I didn't know so many others also followed the tradition

Growing up in Massachusetts, my family also participated in the tradition of butter on the birthday persons nose as well as a spanking for each year, one for good luck and a pinch to grow an inch. Like an earlier comment, when I married, this tradition abruptly stopped. I do not know why we did it, we just did. Looking back, my family was way more fun......maybe my husband should have tried it. It is the simple things in life that bring the most pleasure (and the fondest memories)

I also grew up in Massachusetts and got the butter on the nose from my Dad and the spankings, one for each year and one to grow on. I carry on the butter tradition by buttering my husband's nose each year, no spankings, at first he was not too happy about it, but now he waits for it, lol. My Dad was not Scottish, Irish, or French, so don't know where he got it from.

I grew up in Wythe County, VA and our birthday tradition included nose buttering, a spank for each year with one to grow on, and we were also shoved under our bed. No one knew the origin of this practice.

Never heard of being shoved under the bed. Maybe to see if there was enough butter on the nose to make you slick enough to slide under the bed.

I just had a birthday and was telling my friends about my dad always buttering my nose and they had never heard of it. I googled and found my way to this blog. Even funnier is that I grew up in Patrick County, VA (southern VA) and see that 2 others have posted about this tradition from the same area of the state/nation as me! We also have the tradition of a spanking for each year and one to grow on.

I grew up in Pawtucket Rhode Island and my mother used to butter mine and my siblings noses on our birthday. She said her mother used to do the same.

I grew up in Coventry Rhode Island and my mother always buttered my nose when she woke me up. Today is my birthday and was just remembering about years back. My grandparents were from England and Newfoundland. It was traditions that they grew up with and passed it on to our generation.

Yes, parents from Ireland, my mother always did this when we were young, I had forgotten all about it.

my husband who is from Carroll county VA grew up doing this too! The first year we were together he woke me up on my birthday by rubbing butter on my nose...I was very confused - but I have joined in the tradition. Very cool

Did this in Truro, Nova Scotia now in Smithers, British Columbia, Canada. A buttered nose on your Birthday helps you slide through the year. Have a great day, stay safe