Rooted In History: The Tradition of Acadian and Mi’kmaw Basketry 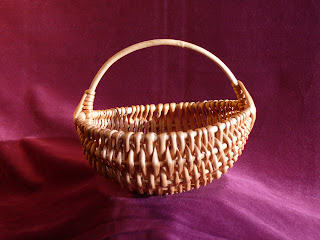 In Newfoundland and Labrador traditionally-made baskets come in many shapes, sizes and styles and can be crafted from a variety of materials. On the west and south coasts of Newfoundland, traditions included Acadian and Mi’kmaw style baskets.

“Baskets once served a very utilitarian role in the province, used for carrying items such as fish, potatoes, eggs and berries,” says Dale Jarvis, a folklorist with the Heritage Foundation of Newfoundland and Labrador (HFNL).

To celebrate that history, the Heritage Foundation is organizing a public talk around the tradition of basket making.

The talk will take place from 7-9pm in the Arts and Science building, Room 379, Grenfell College.

Margaret Pelletier was born on the Waycobah First Nation in Cape Breton, Nova Scotia. Basket weaving has always been a part of her life for as long as she can remember. As a child, Pelletier helped make baskets as a source of income to help support her family. At the age of 18, she entered nursing school in Sydney, NS and three years later started a career as a nurse. Pelletier joined the Maine Basket Maker’s Alliance as a board member which caused her to begin thinking about basket making as a fine art.Throughout the next 20 years, basket and quill work became a hobby for Pelletier, who enjoys creating one of a kind works of art. The natural materials vary in color and texture and Pelletier does the weaving free hand without the use of molds. Her baskets are woven with black ash splints, decorated with curlique designs, and are finished with braided sweet grass. As each basket is delicately woven, each piece takes its place as part of a unique creation made up of intricate designs and artistic forms.

Della Maguire is of First Nation’s Mi’kmaq ancestry and grew up in a home of constant basket making. Her parents Abe and Rita Smith were known as the finest Mi'kmaq basket-making team in Nova Scotia. Unfortunately, she was not part of that process, as watching her parents making baskets seemed to her 'just a part of life' and never once did she realize that their basket making was a cultural form of art. Upon retiring in 2006, Maguire took part in a basket-making workshop and soon realized this was something she needed to pursue. She has taken the art of basket making very seriously and spends her time trying to improve with each basket. Maguire is passing down her skills to her grand-daughters,as she believes it is her duty to continue learning and honing her skills and to share this valuable cultural art. In 2011 she received a grant from Canada Council of the Arts to enhance her skills and currently teaches the craft through workshops of her own.

Eileen Murphy was first introduced to basket making when she attended a class instructed by Mr. Anthony White in 1980. At the time he had been asked to instruct a few students from the new Visual Arts Program, at what was then called the Bay St. George Community College in Stephenville, on the techniques he used in spruce root basket making. Murphy, who is from and still resides on the west coast, enjoys a career as an art educator, teaching for both the local school district and at the Grenfell campus of Memorial University. Her interests surround the fine arts and she enjoys painting and drawing. Textile art is a particular favorite, and Murphy has been weaving baskets from roots, twigs, branches, grasses, vines for the past 32 years. Her interests surround the fine arts and she has spent most of her life surrounded by artisans and crafts persons. Murphy particularly enjoys the traditional arts and crafts of Newfoundland and Labrador.

Helga Gillard grew up and was educated in Englee, White Bay and was the fifth of six children. She went on to attend Memorial University and received a Bachelor of Arts/Ed. Gillard is now retired and living in Main Brook with her husband. Gillard’s interest in baskets was intrigued by locally made birch plaited baskets that were in her home growing up. She is a self taught basket maker, supplemented by basketry workshops held in various Atlantic provinces and interactions with other skilled basket makers. Gillard and has been making baskets since 1988 and joined the Nova Scotia Basketry Guild in 1999. While Gillard has woven many styles of baskets, her primary focus is on rib and split baskets. She also has a keen interest in utilizing materials from her natural environment, such as spruce root and red osier dogwood.

HFNL’s Intangible Cultural Heritage program was created to celebrate, record, and promote our living heritage and help to build bridges between diverse cultural groups within and outside Newfoundland and Labrador.