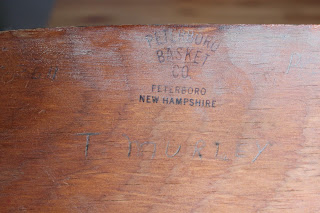 The exact origin of this two-handled, splint style lunch basket design is unknown but research has pointed to a couple of possibilities. In her article, “The Multiple Roles of the Millworker's Lunch Basket in Central Newfoundland”, Jane Burns suggests the baskets were originally factory made imports that resourceful Newfoundlanders deconstructed and learned to make themselves. Research also suggests that the lunch baskets were sold right out of the pulp and paper mills, possibly starting in Corner Brook and carrying over to the others. The mill in Corner Brook opened in 1923 and the oldest lunch basket documented so far is dated 1928, belonging to Doris O’Dell of Corner Brook. O’Dell inherited the basket from her father who used it when he worked in the mill. The basket is factory made, purchased from the Peterboro Basket Company in New Hampshire. This company dates back to 1854 and it's possible the mill in Corner Brook purchased these baskets to sell to employees.

Others, like Wayne Green, also of Corner Brook, feel the baskets may have been originally designed by female basket makers of the Nova Scotia Mi’kmaq tradition. He recalls a woman and her two daughters who would stay with his family when he was a child. Green recounted that the women would come from Nova Scotia, riding the Newfoundland Railway, stopping where the trains did in order to sell baskets of all sorts. His father would take orders from this basket-maker before her arrival and Green remembers the mill lunch basket was always a very popular item. 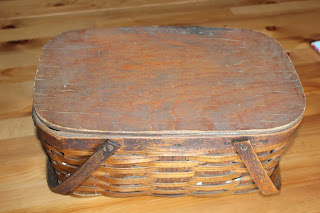 One thing we know for sure is that there were Newfoundlanders who eventually began making the baskets themselves. One of the most prolific and well-known mill lunch basket makers was Angus Gunn Sr. of Grand Falls-Windsor. He began making baskets in the early 1950s and is said to have made hundreds of lunch baskets for local mill workers.