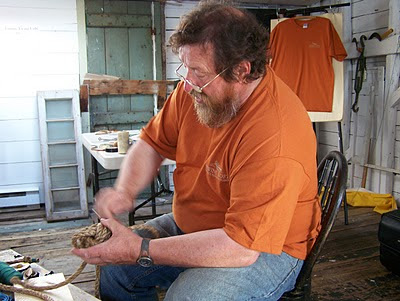 This week's photo is of Captain Jan Negrijn tying knots at the Twine Loft, Trinity, as part of Doors Open in 2007.

Knot tying is one of the topics that comes up from time to time as I do workshops in communities about skills and traditions they are worried about losing. At one time, every sailor and fisherman knew dozens of knots, a huge body of specialized knowledge that is not as widespread today as it once was.

Along with that, there were all kinds of folk beliefs about knots, such as knots in a piece of string, which, when buried, could be a cure for warts.

If you've got memories or thoughts on knots and knot tying in Newfoundland and Labrador culture, drop me a line, so to speak.

If a piece of string of any kind is placed outside the house on the eve of St. Brigid, the good saint will walk on it, and that a piece of the cord worn about the leg or foot will be a talisman against all injury from falls and accidents due to stumbling.

-PJ Kinsella, Some Superstitions and Traditions of Newfoundland
Posted by Dale Jarvis at 5:08 PM