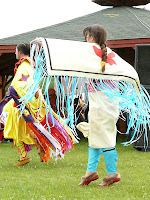 Aboriginal organizations in Newfoundland and Labrador with a focus on preserving cultural heritage are being encouraged to apply to the Provincial Government’s 2011 Aboriginal Cultural Heritage Program (ACHP).

“Established as a pilot project in 2008, this program has funded a number of successful initiatives designed to support the province’s Aboriginal heritage,” said the Honourable Terry French, Minister of Tourism, Culture and Recreation. “As a government, we are committed to safeguarding and protecting Newfoundland and Labrador’s Aboriginal heritage. We want to ensure the practices and cultures of Aboriginal peoples in the province will be celebrated and sustained into the future.”

ACHP supports eligible applicants in the safeguarding of traditions and culture including language, traditional knowledge and skills, storytelling, music, games and other pastimes, knowledge of the landscape, customs, cultural practices and beliefs, food customs, and living off the land.

Successful applicants can receive up to $15,000 for projects that document, pass on, and celebrate cultural traditions. For short-term events that recognize traditional culture, a grant of up to $1,000 is available. Applications are reviewed by the Aboriginal Cultural Heritage Advisory Committee, composed of representatives from Aboriginal groups across the province.

For an application and further guidelines about the program, visit: www.tcr.gov.nl.ca/tcr/heritage/Aboriginal_cultural_heritage_program.html
Posted by Dale Jarvis at 10:44 AM