Riddle Fence #6: An unexpected take on some old cultural icons 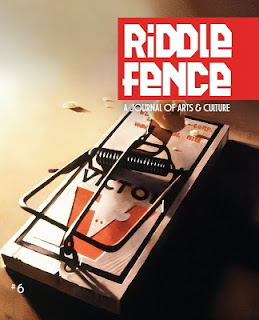 The sixth issue of Riddle Fence, hitting newsstands now, takes an in-depth, eloquent and not always easy look at John Guy’s colony as the Cupids settlement celebrates its 400th birthday.

Launched recently as part of the province’s Cupids 400 celebrations, this issue includes a fascinating and detailed essay by archaeologist Bill Gilbert on written records of the colony’s early days.

Also in this issue, we offer saucy samplings in our Fakelore (as in “fake folklore”) series, including artwork by Jackie Alcock and Robin McGrath's homegrown version of Grey's Anatomy. Meanwhile, 17th century Newfoundland comes alive as Patrick Warner takes a peek at Robert Hayman’s Quodlibets, believed to have been the first book of English verse written in the so-called New World.


Riddle Fence, a journal of arts and culture, is available for purchase at bookstores and magazine stands around Newfoundland and Labrador and across Canada.

Subscription rates and details are available on the website.
Posted by Dale Jarvis at 1:49 PM