What is Tibb's Eve? Drink up, Newfoundland and Labrador, it's December 23rd. 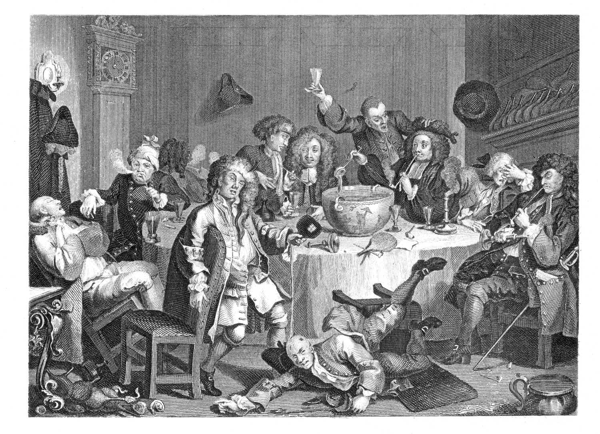 What is Tibb's Eve? And where does Tibb's Eve come from? We've got you covered!

Many Newfoundlanders and Labradorians don't need much of an excuse to have a party. One of the most inventive local reasons might be Tibb's (or Tib's, or Tipsy) Eve.

For those of you who don't know what Tibb's Eve is, in Newfoundland, it is the eve of Christmas Eve, and it has a somewhat complicated history that is both old and new.
Originally, St. Tibb was a character in English plays of the 17th century. A "tibb" in those times was a woman of loose morals, so Saint Tibb was a comedic character, intended to represent an impossible contradiction. Since St. Tibb couldn't exist, St. Tibb's Eve was a day that would never come. Owe someone money? Promise to pay them back on Tibb's Eve, and no problem!
At some point, Tibb's Eve became associated with the Christmas season, as in "a day that occurred neither before nor after Christmas" or "a day between the old year and the new." 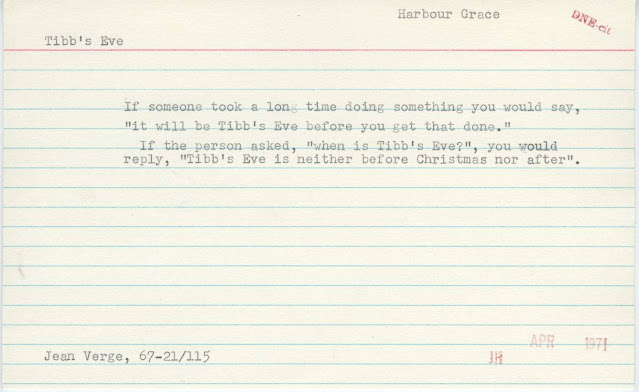 Image: Dictionary of Newfoundland English Word Form Slips - Tibb's Eve
Newfoundlanders, perhaps looking for a reason to enjoy a drink during the abstemious season of Advent, inserted this day-that-would-not-come into their personal calendars. Somewhere on the south coast of the island, sometime after WWII, the day got fixed to December 23rd.
In the 1960s and '70s, the expression still largely meant a day that wouldn't come, but in the '80s and '90s, the day of celebratory Pre-Christmas lubrication became more popular. Circa 2009-2010, St. John's bars and arts organizations introduced the idea of Tibb's Eve events to townies. With the rise of social media, the concept took off, and ex-pat Newfoundlanders spread the cheer wherever they were hunkered down for an away Christmas.
Thirsty for more? There are a few places online you can look for more details:


In the mood for a suitable libation for Tibb's Eve? Why not try Charles Dickens's Own Punch, from 1847:


Peel into a very common basin (which may be broken in case of accident, without damage to the owner's peace or pocket) the rinds of three lemons, cut very thin and with as little as possible of the white coating between the peel and the fruit, attached. Add a double handful of lump sugar (good measure [although Dickens had rather small hands]), a pint of good old rum, and a large wine-glass of good old brandy‹if it be not a large claret glass, say two. Set this on fire, by filling a warm silver spoon with the spirit, lighting the contents at a wax taper, and pouring them gently in. Let it burn three or four minutes at least, stirring it from time to time. Then extinguish it by covering the basin with a tray, which will immediately put out the flame. Then squeeze in the juice of the three lemons, and add a quart of boiling water. Stir the whole well, cover it up for five minutes, and stir again.

Enjoy the day! Have a memory of Tibb's Eve, or call it something different? Comment below!

I guess I should leave a comment as nobody else has, or maybe I will wait til Tibbs Day.

My mother always had a meal of boiled cod fish, with butter and pepper. And tonight my husband did that in her memory. I've heard that other NLer's do the same.