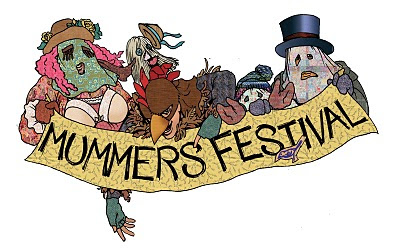 The big day for the St. John's Mummers Parade is coming up fast, and we want you IN the parade! Full details at: http://www.mummersfestival.ca

The Mummers Parade needs you…and in disguise. We invite all mummers, janneys, hobby horses, Christmas bulls, nallajuit, ribbon fools, wren boys, and wren girls to this most exciting people's parade. According to some accounts, St. John’s used to have a mummers parade in the 1800s, and groups of mummers still parade from house to house throughout the province. But you won’t see too many mummers parading the streets of St. John’s these days. We’d like to change that. So shake out those long johns and borrow your Aunt’s size 42 bra. We’re calling all mummers to the Mummers Parade.The parade will start at MacPherson Elementary, pass through the Georgestown neighbourhood, and end on the grounds of The Rooms for a Christmas concert and Mummers Jam with music, dancing, and spaces for impromptu performances. We hope for more mummers than spectators in what might be the most exuberant, participant-focused parade in the province. Bring your music makers, disguises, hobby horses, wren sticks, songs, and dances.

When at The Rooms, stay in costume long enough to have your picture taken at our photo booth, so we can create a permanent archival photo collection of all our mummers!

PARKING:
There is no parking available at MacPherson School.


MUMMERS PARADE FOOD DRIVE
The Georgestown Neighbourhood Association is organizing a food drive in support of the Community Food Sharing Association in conjunction with the Mummers Parade this Sunday, December 20th. Food donations can be dropped off during the Rig Up at the entrance t MacPherson School prior to the parade beginning at 11:30 a.m., or at the Rooms at the end of the parade until 5:00 p.m.. Also, food-bank mummers will be collecting donations during the parade.

Please be generous with your food donations, and enjoy the parade and concert/jam!!!
Posted by Dale Jarvis at 10:48 AM