The Annotated Jack: A tale of two characters, from Newfoundland, named Jack. 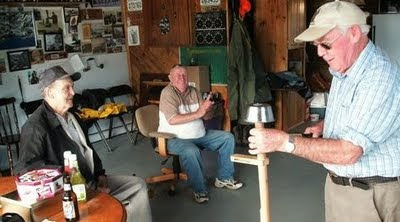 A romp through a tale of two "Jacks": one the hero of traditional folktales; the other a retired fisherman passing the time in his fishing stage spinning tales of his youth.

You'll find them both in Newfoundland -- like Ireland a big island anchored off a bigger continent -- populated with the descendents of Irish and English fishermen. Populated too with the stories and folktales that those settlers brought with them centuries ago, and handed down by word of mouth through the generations. In particular, you'll find folktales which usually begin like this:

"Once there were 3 brothers: Tom, Bill, and Jack. Now Tom and Bill, they were handy, they were actually able to do something. But Jack, well, all Jack could do was sit by the fire, and.."

.and we're off on a fantastical tale of derring-do starring Jack, the ne'er-do-well youngest brother. In the traditional tales, he slays giants, outwits witches, befriends every creature he meets, carries out magical feats by applying simple common sense and an innate naiveté, finds his Fortune and marries The Princess. This is Jack, the poor youngest son who unlocks the secrets of living and embraces magic as his kingdom, the unlikely big-hearted hero who undertakes impossible tasks and survives incredible adventures to ultimately live happily ever after.

The other Jack in this documentary is not mythical at all, but a very real retired fisherman living by the harbour in St. John's city: Jack Wells. This Jack and his friends spend each day together sharing memories and telling stories in his twinestore - a fisherman's shed crammed with stored nets, rope, and fishing gear. Telling stories "makes the time go quicker" they say, remembering their own impossible tasks and incredible adventures.

The stories told in Jack's twinestore are tales of fish, of falling overboard, of coiling more rope or splitting more fish than anyone, of days when the wind came up suddenly, of when the motor froze or the cod were scarce, tales of doing battle with the giants of weather and outwitting the witches of officialdom, and always in the end winning the Princess of Fish in the Kingdom of Memory. Adventures no more or less unlikely than those of the other told-about Jack who eventually finds his fortune, too.

This documentary weaves together the real and the mythical Jack, and considers the role that stories play in accompanying us through life and into retirement. In the end, as the story goes: "if they don't live happily ever after, then may all of ye"
Produced by Chris Brookes at Battery Radio in Newfoundland for RTE Radio 1's, Documentary on One.
(Photo left to right) Charlie Riall, Jack Wells, Mike Walsh