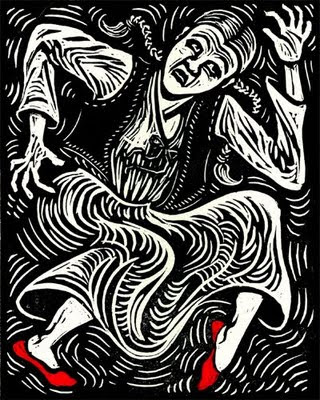 I'm hoping some of you might have heard something similar to this story before.

I was speaking with a woman whose grandmother had told her a cautionary tale as a child, to keep her from slipping out of her sheets in the bed at night. The grandmother told her a story about how every night at midnight, there was an old man and an old woman who would visit the room. The woman would carry a bucket and the man would carry an axe. If they found a child whose feet poked out of the bottom of the bed, the old man would cut off the feet, and then would use the feet to make shoes for poor children.

The woman who told me the story said that her grandmother was from Louisiana originally, and had later lived in Oklahoma, and thought she was of mixed Scottish and Dutch extraction.

I'm curious if anyone recognizes any motifs in this, or has heard a version of this story. It reminds me a little of some of the Der Struwwelpeter stories by Heinrich Hoffmann (1845), and the feet getting cut off sounds a little like H.C. Andersen's Red Shoes (also 1845), but again, isn't a perfect match.

If you have any thoughts, let me know! Is this a folk belief, a literary tale, or a grandmother with a wicked sense of humour?

Email me at ich@heritagefoundation.ca
Posted by Dale Jarvis at 2:37 PM